So, tomorrow is my 14th Anniversary to my precious hubby.  For those of you who don’t know, Trey and I were set up on a blind date.  I had been on many blind dates so I wasn’t expecting anything amazing to happen.  In fact, he was my second blind date that week.  Plus, I wasn’t in a place in my life where I wanted to get married.  I was finishing my undergrad degree and was starting the process of applying to grad schools.  I was dead set on NOT allowing a man to change my plans.

We decided to meet one another at a restaurant.  I had no idea what he looked like so I stood outside the restaurant nervously waiting for his arrival.  I remember one guy walking up towards me and inside I thought, “Oh please no!  Don’t let this be him.”  Next I saw this tall hottie walking my way with a big smile on his face.  “Now that’s more like it!” I thought.  Throughout dinner our conversation was easy.  It wasn’t forced in any way.  I could tell he had many of the qualities I wanted in a husband, but again I wasn’t changing my life for just any man.  As the dinner came to an end, he asked if I would like to go on a second date.  I agreed and jumped in my car and immediately called my mother.  I remember saying, “I don’t know if this man is going to be my husband, but I do know, I want to marry someone just like him.”  I later found out he immediately called his brother and said, “I just met the girl I am going to marry.”

Our courtship was VERY short.  We met one another and married 52 days later.  Interestingly enough, it was the same amount of time my parents dated before marrying.  Of course, we did not plan it that way.  We eloped to my parents house where my grandfather married us.  I wore a simple black dress (big surprise for those who know me).  Here are a few pics… 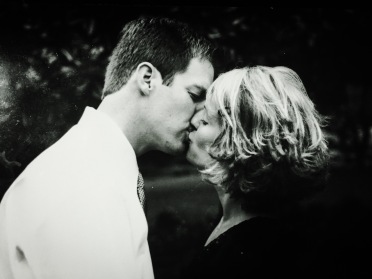 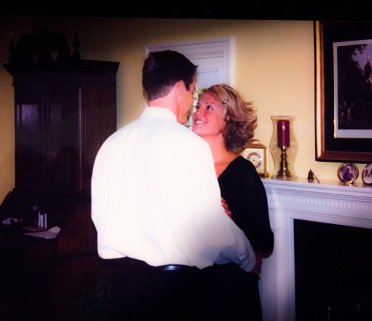 Look at my face during our vows!  That’s a face of someone in love and completely unaware of anything else going on around her.  It’s a face of delight, optimism, enchantment, desire, and passion.  It’s also a face of a girl who in reality was very spoiled, self centered, and completely unaware of what was about to transpire.  So much for not changing my plans for a man.  But seriously, I knew he was to be my husband.

Our first couple months of marriage are hilarious to look back on now.  I knew who Karma Armfield was, but Karma Harkey seemed much harder to identify.  I’m not sure why a name change felt so unsettling, but I was trying to find my identity as a wife.  I remember Trey would ask me to do something and I would think, “Ummm….my parents take care of that.”  We learned very quickly that we had very different ways of communicating and unfortunately we seemed to be misunderstanding each other.  We decided to go to counseling  and after three sessions we began to understand one another better.

Our counselor explained there are two styles of communicating.  One is a “pointer”.  They are direct and tell it like it is from the start.  They don’t waste a lot of time getting their point across.  The other style is a “painter”.  They need to paint a picture for you and this usually entails lots of details.  He said you can always throw away the first thing a “painter” says because it’s not what they are trying to convey, but rather only a small brushstroke on the canvas.  Whereas, you can take the first thing a “pointer” says to the bank!  They are more blunt and direct.  Often times a “painter” can have their feelings hurt because the “pointer” can come across a bit harsh.  On the other hand a “pointer” tries to take the first thing the “painter” says and interprets it as the main idea of what they are saying.  So, miscommunication is extremely easy when the two styles collide. Once we understood this concept, it transformed our marriage.  I will let you guess who is the “pointer” and who is the “painter” in our marriage. Hint: Trey calls me his M&M.   He says I can appear hard on the outside, a bit blunt at times, but underneath I am a softy.  HA!

Today in particular, I have been thinking about the last fourteen years of our marriage and contemplating all the seasons we have gone through together.  Some seasons have been smooth and easy, while others have been more difficult and stressful.  I can say with confidence that Jesus is the reason our marriage is strong.  I don’t know how people survive the harder times without Jesus at the center of their marriage.  Trey has walked by my side through this sickness.  When I feel guilty that I cannot do all the things I could do before POTS, he always corrects me.  He hates when I feel like I am a burden.  He always assures me he loves me deeply and doesn’t mind one bit taking care of things when I cannot.  He has shown more love and grace in this situation than I could ever imagine. He has expressed that he has learned to enjoy each moment and appreciate the things that really matter.  The rest of the stuff is just fluff.  He says that POTS has only made us a stronger couple and he can see the blessings that have come from this illness.  That’s not to say every day is a breeze by any means, but I am saying he has shown his commitment in sickness and in health.

So what would I want to say to him today?  I would say thank you.  Thank you for standing by my side through all of the ups and downs.  Thanks for making me feel like the most beautiful woman in the world when I know I look like a hot mess.  Thank you for continually providing for our family.  Thank you for being the most amazing father to our children.  Thank you for the love and adoration you show me daily.  Jesus has blessed us greatly!  My prayer is that we will share many more anniversaries to come.

Now what would I say to those reading this?  I would say, you can plan your entire life, but ultimately when you place your life in God’s hands, He blesses you beyond your wildest dreams.  I can say almost everything I have planned in life has not worked out like I envisioned it.  I said I would never live in my hometown, and yet we bought the house I grew up in to raise our children.  I said I would never have children, and God has blessed us with two precious babes.  We had plans for what we thought our life should look like at this moment, and it looks NOTHING like what we had envisioned.  Yet, now I look back and say, “Thank you LORD!  Thank you for unanswered prayers.  Thank you for guiding our steps even when things didn’t make sense to us at the time.  Thank you for giving us grace to walk through the harder times, and thank you for blessing us even in those hard moments.  Thank you for loving us enough to teach us as we go, and thank you for picking us up when we fall down.”  If you feel as though your life plan has been turned upside down, take a moment and look around.  You may find, as we have, that you are right where you are meant to be.  Trust His plan!  He will make it worth your while!